He still cares for individuals

I find it easy to get caught up in the big picture of trying to fix all of Angola's eye problems, train future ophthalmologists, and lead the Boa Vista project, instead of appreciating the individuals that we treat. However, from time to time God sends patients with stories so memorable that I cannot help but thank God for allowing me to be a part of this good work.
Today I will share two stories from surgeries that were done yesterday at Boa Vista that touched my heart deeply. This work would not be possible without the generous support of readers like you. So read, reflect and give thanks to God because He is still in the business of performing miracles and transforming lives of individuals.

1. Joaquina is 45 years old and lives in Luanda. She is blind in both eyes from cataracts and she has severe leg deformities from the polio she suffered as a child. 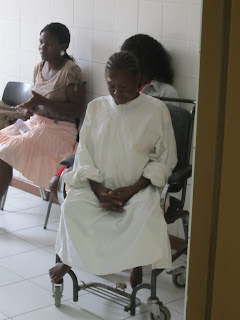 In the neighborhood she lives in there are no side walks or roads that a wheelchair could access. She crawls on her hand and knees using flip flop sandals as "shoes" for her hands. She entered the consultation room with some difficulty, feeling her way across the room using her hands to guide her blind eyes. Her eyes had a type of cataract called posterior subcapsular cataract. Previous to my arrival at Boa Vista this type of cataract surgery was not being done, because it is more difficult to perform than a "normal" white cataract. She would have been told to return in 6 months when the cataracts were "ripe".
However, thanks to a generous donation of a modern cataract surgery machine (thank you Chris and Steve) I said yes we can help!
I performed a perfect phacoemulsification surgery on her right eye yesterday and this is the sight I was greeted with today as I entered Boa Vista. 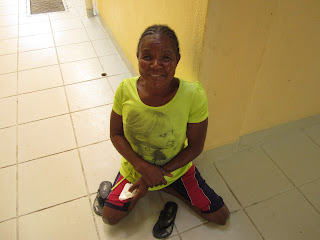 One very happy patient and one very grateful doctor who can't believe how good God has been. We were able to restore her sight and help her navigate through her world. I can only imagine the troubles she had navigating blindly on her hands and knees through the dirty streets of Luanda (which is a third world version of New York). Now, if only I had a friend who did orthopedic surgery....

We are now running a successful phacoemulsification program in addition to our manual cataract surgery. Effectively expanding our capacity to help the greatest numbers of people and blessing me with the ability to stay current in cataract surgery technology. When I left for Angola there was no modern cataract surgery being done here and I was worried that I would forget how to do the surgery and be unable to return to the United States because of my diminished surgical skills. Those worries proved (as most are) to be lies. Through the generous provision of donated equipment and materials my surgical skills have multiplied and I am a far better surgeon and capable of performing a wide variety of surgeries well.

2. Our next patient is Lorenzo,  a 31-year-old man, who was led into the clinic by his brother. For the last 16 years he has been blind. Imagine that. A young healthy man unable to work, study, play soccer because of blindness. They said his eyes always looked a little funny since birth; but only after the "white spots" came was he completely blind. 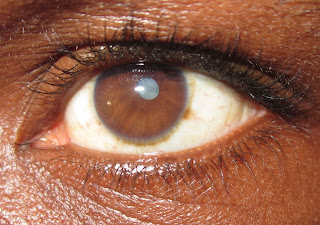 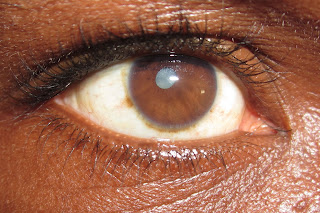 For the non-eye doctor I will briefly describe the pictures. First his iris (the brown part) has a congenital abnormality, the pupil is not in the center of the iris but rater displaced up and out. Actually this is as big as the pupil would get as it refused to dilate with eye drops. There is the white spot, or cataract as I like to call them. The pupils slightly reacted to light, but he could point to the direction from where my light was coming from so I thought he could see if only we could do a cataract surgery. I performed an ultrasound of the eye and discovered that it was a very small eye only 18 mm in diameter (normal is 22-24mm). He would also need a lens implant that was very high in power (33 diopters), which I discovered we actually had here!. I did surgery on friday. It was one of the most challenging surgeries I have done in a long time. The orbit/eye is very small and had difficult access surgically. The anterior chamber was extremely shallow. The pupil was indeed only this big after multiple rounds of eye drops. I was saved by another donation of flexible iris hooks (Thank you Chris) which allowed me to mechanically retract the iris and open a pupil to give me access to the cataract. When I opened the iris for the first time I saw a perfectly white nucleus surrounded by darkness, I was worried that the lens would be dislocated. However, after proceeding it was only the very clear cortex I was seeing and the lens was actually not dislocated. The case went well. 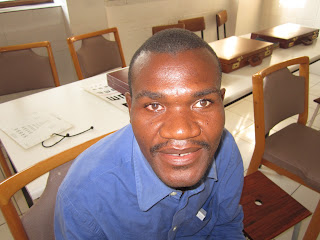 His vision was 6/24 today 1 day after surgery. I expect that to improve in the next few days. But today we had a good time shaking hands and hugging as the man who was blind, now sees.

There are so many stories like these at Boa Vista. I admit with some shame that at times I forget about these precious individual lives and their stories as I strive to change an entire country's eye health care system (and become jaded in the process). Thank you God for sending me gentle reminders about your love and care for individuals and for using a selfish creature like me to bless others.
-John

Posted by John and Lori Clements at 7:42 AM 2 comments: