This is Africa (TIA?)

I ( John) am just returning from a short 5 day visit to CapeTown, South Africa and Windhoek, Namibia. Before discussing the details of the trip, I must tell you what happened to Lori and Zeke as I was on the flight to South Africa. Zeke got a very high fever and had a seizure! The situation was actually very serious as he stopped breathing and Lori and to resuscitate him. I am thankful that he is making a good recovery now. We still don’t know exactly what it was, he has been checked for Malaria 3 times since and have all been negative. We are treating him for it anyway. Very odd timing since everybody has been very healthy up until now. I felt this illness was sent specifically to distract me from the upcoming meetings we had coming up with CBM (Christian Blind Mission). I really wanted to return to Angola immediately upon landing in Cape Town, and had trouble focusing on the presentation upcoming. However, we serve a God who is greater than any force of evil and he showed that to me by taking better care of Zeke than I could have if I would have been there physically. Before the presentation to CBM Africa, I got word from Lori that the fever had broke and Zeke was acting normally without any visible effects.  I am proud of the way Lori handled the situation, I really was blessed the day I married her.
Now, on to the Trip. 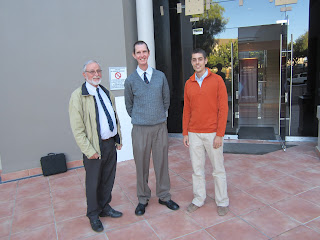 Here is a picture of the lead CBM consultant doctor, Dr. Collin Cook, myself and Dr Jean-Pierre Brechet (JPB) outside of their office in Cape Town.  JPB and I came to meet with CBM to discuss continued funding for Boa Vista and the possibility of CBM adding a doctor co-worker in Angola, essentially a CBM supported doctor position. Our project is a 3 year proposal designed to increase the volume of cataract surgery done at the Boa Vista project through the training of Angolan doctors to do cataract surgery.
This project is very important to me, I have a strong passion to train Angolan nationals and feel that God has equipped me to do so. In fact, training of nationals to do the work is included within Lori and my mission statement. In the 6 months we have been here, that mission has yet to be realized which has been frustrating. If the work here in Angola continued in this path, I would have had to reconsider our long term engagement here.
Currently a new opportunity to teach at least one Angolan doctor starting in July, with more on the horizon. This will be a new project located in the north of Angola.  CBM South Africa could see the potential in our project, and responded favorably to it. They feel this is a feasible goal, and were excited along with us concerning this opportunity. As a result of the meeting, there is the potential for staying on in Angola as a funded Co-worker. Nothing is final yet, as this position has to go through the CBM board in Europe, but it is possible that the funds for this position have already been allocated. So, we now wait and see. I am praying that God will open the doors as only He can do.
After our meetings were concluded we got to see some of the sights of Cape Town, and enjoy some very nice food, pictured. 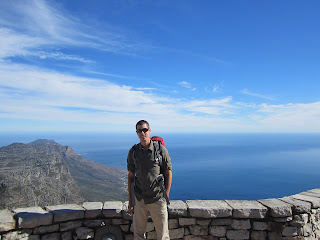 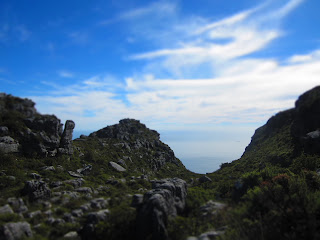 Table Mountain provides great views of the city and ocean below. Cape Town has quickly become one of my favorite cities in the world. The combination of mountain adventures, beautiful ocean coastline, and just the right amount of Africa mixed in was really fun to experience. 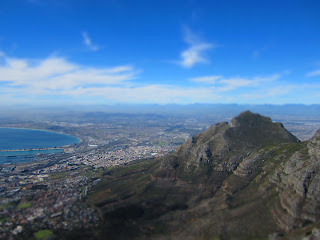 It was really hard to believe that Angola and Cape Town exist in the same continent. They are worlds apart, and further highlight the disparity between the developed and developing world. 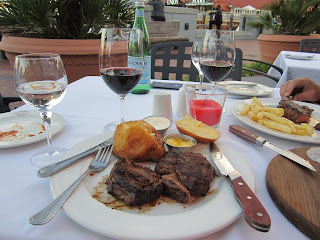 After 6 months of Angolan "funge" (corn meal mush) this steak seemed to be the best 20 oz ribeye steak in the world. In fact it was a great cut of meat, and to make the experience better we ate this in the shadow of Table Mountain on the waterfront in Cape Town. I recommend "Baltshazar" steakhouse to anyone in the area.
After this brief 2 day visit to Cape Town, we flew north to Windhoek, Namibia. This was also a brief visit, with time taken to conclude some importation business and meet with a local ophthalmologist who has a Private Practice in Windhoek. Great meeting, and good future contact for me.
Later that day, we drove 30km out of the city to a game park and got to witness Lions being fed. Wow, we got so close to them, never any real danger as there was an electric fence between us and them. But close enough to feel very small compared to that massive cat. Because Angola destroyed all the large animals (Lions, elephants, Giraffe, etc…) during the war, this was my first experience  where I felt I was in the Africa you see on National Geographic.  I am looking forward to bringing Oliver and Zeke back to this spot, they will love it. 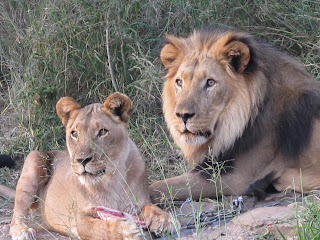 Tommorow we will drive to the province of Uige. We are planning a new clinic there. Currently we are training 4 nurses that will work there. Hopefully in July we will begin training a doctor to perform cataract surgery there! There is hope yet to train doctors here in Angola.


Posted by John and Lori Clements at 7:40 AM No comments: